Het boek “The patriot behind the pot”

DenRon Collections > Nieuws > Het boek “The patriot behind the pot” 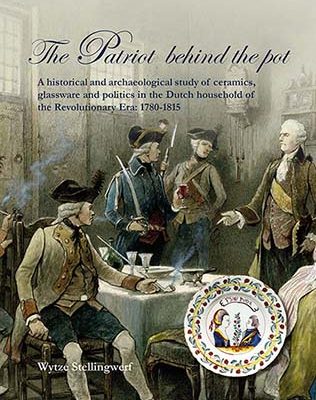 The Patriot behind the pot. A historical and archaeological study of ceramics, glassware and politics in the Dutch household of the Revolutionary Era 1780-1815

The Patriot behind the pot tells the story of pottery, people and politics in the Netherlands during a time of great revolutions -revolutions both in a political and industrial sense. This study shows how in the late 18th century many Dutch people used a wide range of ceramics and glassware in their homes as media to convey their political stance in favour of, or against, the ruling House of Orange. Many of these political charged items, over 200 years old, have been preserved in museum collections. Sporadically, further fragments are retrieved from archaeological sites as well.

On the one hand there were the Orangists, supporters of the house of Orange-Nassau. According to historians  they mostly were the common people. On the other hand there were the supporters of a more republican model, the Patriots, who generally belonged to the middle class.
The Patriots were concerned about the large-scale foreign imports, especially from progressive England, that pushed domestic products off the market and caused great unemployment. At this time, Dutch industry had not yet come up with an answer to this.

And of course the English ceramics industry supplied both sides. They produced tableware with Orangist images for the Dutch market, or supplied undecorated products that were finished in the Netherlands. Indeed they also sold ceramics with transfer prints of Patriotic motifs to those who actually wanted to ban imports from England. Stellingwerf even found proof of skippers who smuggled such items into the country for one or both factions.

Along with dozens of documentary sources and hundreds of other ceramic and glass artefacts that were discarded or lost by their former owners, recovered from the same archaeological contexts, these fascinating objects with a definite political meaning have now been examined in order to understand the diverging material culture of Dutch Orangists and Patriots in the period around 1800. Apart from a thorough study of late 18th- and early 19th-century ceramics and glassware in the Netherlands, this book presents an extensive catalogue of politically charged items from the period 1780-1815. This should help archaeologists, art historians and collectors to recognize and further study these objects of great historical significance.

It is truly fascinating to see how these political clashes in the Netherlands exerted their influence not only down to the level of a Dutch household, but also how their expressions, especially on ceramics, spread worldwide, including Britain and especially America.

This book is based on the author’s Master thesis. In 2017, Wytze Stellingwerf graduated at the Faculty of Archaeology at Leiden University. This thesis was nominated for three prizes: the national archaeological W.A. van Es prize, the Leiden University thesis prize and the IISG prize of the International Institute of Social History in Amsterdam. 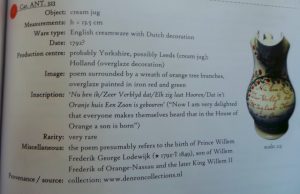