The inauguration of Queen Beatrix 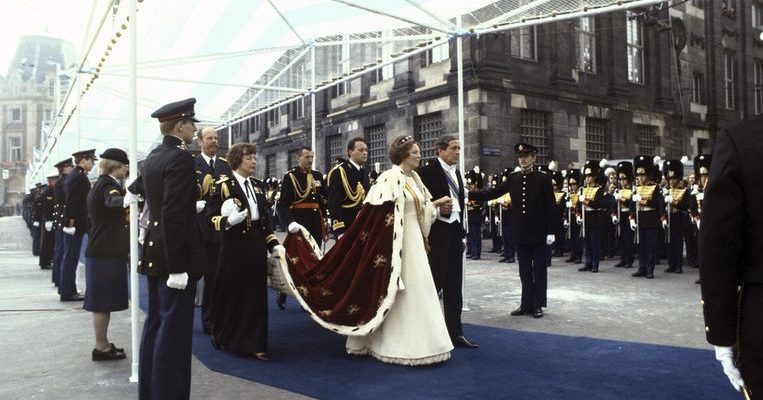 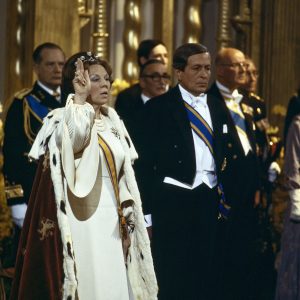 On April 30th, it will be forty years since Queen Beatrix ascended the throne.

A few months earlier, on January 31st 1980, Queen Juliana informed her people that she was going to abdicate. She considered it no longer responsible to continue her task due to her age and corresponding health and diminishing strength.

The signing of the abdication and the inauguration itself on the same day had never happened before.

People arrived very early on the Dam Square in Amsterdam because they did not want to miss this historic event.

We also were there (at 4 am) with our friend Bryan, who had arrived from London especially for this occasion. We had an excellent spot at the front (we could lean on the barrier) so that we could see everything clearly. We had brought food and drink with us, but drinking was not a good idea because you couldn’t leave your place to go to the toilet! 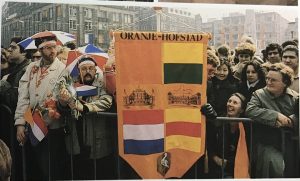 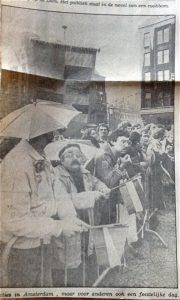 We even made the press

The public was entertained by people wearing traditional Dutch costumes from all areas of The Netherlands and performing folk dances etc. and refreshments (snack & drinks) were distributed to all present. 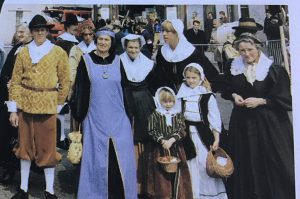 Unfortunately, there were also protests under the motto “No homes no Coronation” by people who protested against the housing shortage.

At ten o’clock the act of abdication was signed by Juliana, making Beatrix automatically our new Queen.

Juliana and Bernhard with Beatrix and Claus appeared on the balcony of the Palace at 11 am. There was a lot of noise and the sound system didn’t work properly. Juliana asked for silence then presented Beatrix as our new Queen, Beatrix then gave her speech.

In the afternoon Queen Beatrix walked from the palace to the New Church under the pergola decorated with the traditional fishing nets to her inauguration.

She wore the Royal King’s Mantle around her shoulders. The mantle was prior to the coronation found to be in poor condition and had to be repaired. The pelerine (mantle that only covers the shoulders) of ermine and velvet was renewed and the lining was partially replaced.

In the church, those present could hear the sirens of the police, who had difficulty keeping the rioting squatters away from the Dam Square.

On our way home it was still very restless in the city and we saw what havoc had been caused by the rioters. Windows were smashed with paving stones and a lot of police were still present. 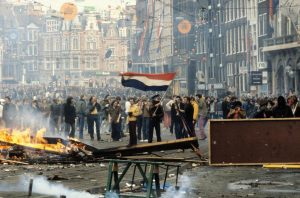 Riots in the city

Back in the Palace, the official photos were taken and the new Queen was informed of the riots in Amsterdam. Despite everything, Beatrix was ​​determined to continue with the program.

After the gala dinner consisting of a buffet, the Queen and her guests boarded the ship “The Princess Beatrix” to enjoy a fireworks spectacle on the river  IJ.

Despite everything, it was a day to remember.

Below are some souvenirs made for the inauguration. 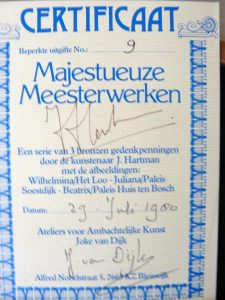