Daughter of William Frederick (1772-1843), later King William I of The Netherlands and Queen Wilhelmina (Princess of Prussia).

Marianne married on 14th of September 1830 Frederick Henry Prince Albert of Prussia (1809-1872). From this marriage five children were born, two of whom died young. The marriage ended in divorce in 1849. Marianne moved from Berlin to Voorburg near The Hague and began a relationship with Johannes van Rossum (1809-1873) her coachman; a son was born from this extramarital relationship

Living openly with her subordinate caused a scandal and social measures against Marianne were hard: she was expelled from Prussia and separated from her children. Also, King William II and his wife Queen Anna Pavlovna cut off all contact with her.

The scandal surrounding Princess Marianne was not hidden from the public. The Dutch tabloids regularly wrote about her extraordinary circumstances. The ‘Prussian connection’ of the Orange house was damaged by it. Only in the twentieth century does interest arise for the special life of this Princess Marianne. The Princess Marianne died in 1883.

Marianne is buried in the grave of her beloved Van Rossum, the German Erbach in the Rheingau. Queen Wilhelmina toyed with the idea to bring her ‘back’ to the royal crypt in Delft. However, this has never happened.

Given the difficult life story of Princess Marianne there are not many souvenirs made showing her likeness, that makes these items very special and very rare.

The vase is made of Brussels porcelain and has a hand painted portrait of the Princess of 1830. Probably made to commemorate her wedding with Prince Albert. The pipe is from  ca 1834. 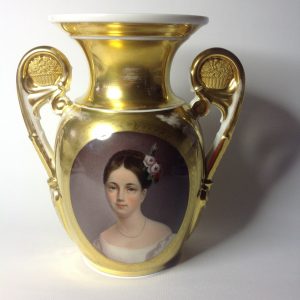 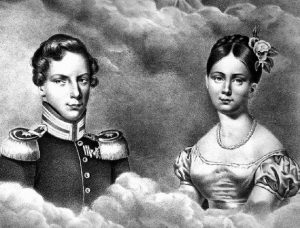