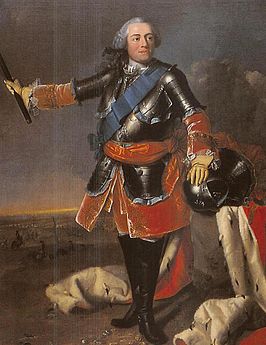 Prince Willem Karel Hendrik Friso was born in 1711 in Leeuwarden. Willem IV married Anna of Hanover in 1734. The couple had 2 children, a son and a daughter. The son later became stadtholder Willem V.
In 1746, France attacked the Dutch republic, Flanders & Brabant were taken and the people wanted another prince of Orange as Regent to resist the French. In 1747, Willem IV was appointed stadholder by the Zeeland States. Not long afterwards followed by many other regions, which made him one of the most powerful stadtholders ever.
He succeded his father Johan Willem Friso who died in 1711.
Johan Willem Friso inherited the title Prince of Orange after the death of the childless King Stadholder Willem III in 1702. This legacy was challenged by Frederik van Prussia and to settle this, Johan Willem traveled to The Hague but drowned during the crossing of the river the Hollands Diep .
1711 to 1747 is known as the second stadholderless era.
Although Willem was not a direct descendant of Willem van Oranje, but of his brother Jan the Elder, he was, through all four of his great-grandmothers and one great-grandfather, a descendant of the Father of the Fatherland.
Prince Willem IV made his triumphant entry in Amsterdam on May 11th1747. The Orange madness broke out all over. The city was decorated in the Orange colours and those who did not wear orange had the chance of being thrown into the canal. Although stadholder William IV was not a man of change, he was a hard worker. He died in 1751. At that time he had been governor of all regions for forty years and four years.
In our collection we have a silver spoon with an image of Willem IV and on top of the spoon the crowned weapon of Amsterdam. This spoon dates from 1909 and was made by the Niekerk brothers from Groningen, 158 years after his death. Made possible as an Orange souvenir to commemorate the Orange madness during his arrival in Amsterdam and in the year that the Orange madness peaked again with the birth of Princess Juliana in 1909. In those days it was not unusual that souvenirs of princes from the House of Orange were made long after they died, there are also spoons with a portrait of Willem V that were made later. 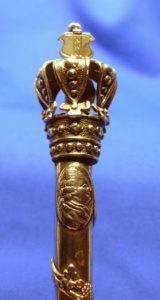