by denron
History
0 Comment 14
Prince Hendrik was born on  June  13th 1820 at Soestdijk Palace, the third son of King Willem II and Anna Paulowna. He had two older brothers, Willem and Alexander and a younger sister named Sophia. A younger brother Ernst-Casimir unfortunately passed away when he was 5 months old.
Governors who reported daily on their progress raised the children. Prince Henry proved to be more diligent than his brothers.
The prince had an interest in the sea from an early age and on his 10th birthday, King William I appointed him as a midshipman first class. His teacher Pieter Arriens taught him to sail a boat independently.
From 1832 to 1838 he made trips to the Mediterranean, Brazil and the West Indies, he was the first prince of the House of Orange to visit Aruba, Curacao and Paramaribo. In 1837 he went to the then Dutch East Indies where he stayed for 7 months.
He amassed a fortune with shares in, among other things, tin ore.
His long career in the navy earned him the nickname “The Navigator”. In 1850, his brother, who was then King William III, appointed him as Stadtholder of the Grand Duchy of Luxembourg.
The prince married Amalia van Saksen weimar Eisenach on May 19th 1853, the marriage remained childless. 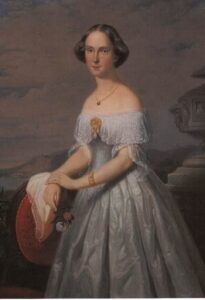 Princess Amalia (foto wikipedia public domain)
Amalia died in 1872, the prince decided to remarry. This is also because the Orange dynasty was hanging by a thread. His brother King Willem III had 3 sons, of which Maurits had died at a young age and the other two were still unmarried. A male offspring was still of great importance for the dynasty.
On 24th August 1878 Hendrik married Maria van Prussia daughter of Prince Frederik Karel in Potsdam. This marriage also remained childless. 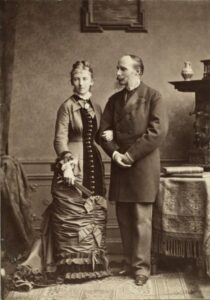 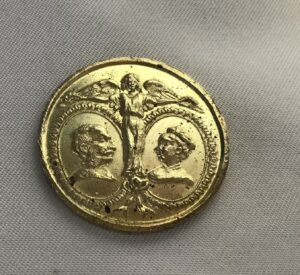 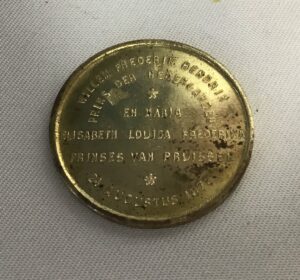 Medal from our collection made to commemorate the wedding of Hendrik & Maria © DenronCollections
His brother the king who was also a widower had the same idea, married Emma van Waldeck Pyrmont on January 7th, 1879. Prince Hendrik was supposed to be a witness at his brother’s wedding, but he had to cancel because he had contracted measles.
On January 13th, 5 days after Willem III’s wedding, Hendrik suddenly died of a brain haemorrhage.
Due to the death of the prince, the wedding parties of Willem and Emma were postponed.
Prince Hendrik was interred on January 25th 1879 in the crypt of the Oranjes in the Nieuwe Kerk in Delft. 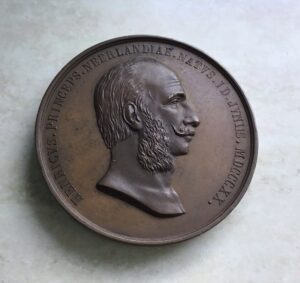 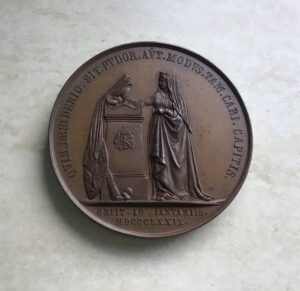 Medal from our collection made to commemorate the death of prince hendrik in 1879.©DenRoncollections
Share