Prince Hendrik was born on April 19, 1876 in Schwerin as Heinrich Wladimir Albrecht Ernst Herzog zu Mecklenburg. His parents were Grand Duke Frederick Francis II of Mecklenburg Schwerin and Princess Marie of Schwarzburg-Rudolstadt.
When Hendrik was 7 years old, his father died. Hendrik attended the Gymnasium in Dresden.
As a young man he traveled through Greece, Ceylon and British India, Tibet and India.
This was followed by a military career in which he became a first lieutenant in the guard battalion hunters in Potsdam. It turned out that he was not really suited for a military career. and went to work at the Ministry of Finance.
At the beginning of 1900, Queen Emma began the search for a marriage candidate for her daughter Wilhelmina. Mother and daughter traveled to Schloss Schwarzburg in Thuringen where meetings had been arranged with three candidates Friedrich Wilhelm of Prussia and two brothers Mecklenburg Schwerin.
The choice finally fell on the only one of the brothers who showed up, that was Heinrich. The engagement was announced in October and the marriage followed on February 7 (see article about this elsewhere on this history page). On the day of the marriage his name was Dutchisised and he was known as Hendrik.

some wedding souvenirs
The prince was kept out of state affairs and in the beginning devoted much of his attention to hunting and improving the game population in the Veluwe.
By hunting wild boar he got the nickname Varkensheintje. He didn’t like to read, but he liked cards and jigsaw puzzles.
He became commissioner of the Boy Scouts and chairman of the Dutch Red Cross.
Hendrik had a frivolous lifestyle and was in debt with gambling. He also had various affairs outside of marriage and children were born from those affairs. Because of all this the marriage of Wilhelmina and Hendrik deteriorated. From 1914 they also slept separately.
The prince’s health declined in the last years of his life. He had rheumatism and in 1929 he had a heart attack.
He received his second on June 28, 1934. On July 3, the prince enjoyed lunch after a long sleep, but at half past two his condition suddenly deteriorated and he died within seconds. He was only 58 years old.
The funeral on July 11 was in white.
Prince Hendrik appears on Orange souvenirs as Wilhelmina’s husband, which is why they are always depicted together. Some postcards were also made of the prince on which he alone is depicted, including a series of cards about the sinking of the ferry SS Berlin in which Hendrik was involved, and after his death an in memoriam plate and a token were issued. 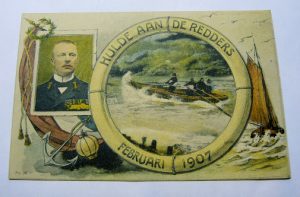 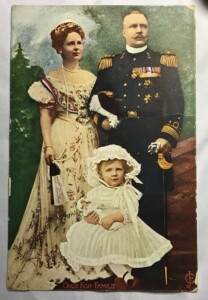