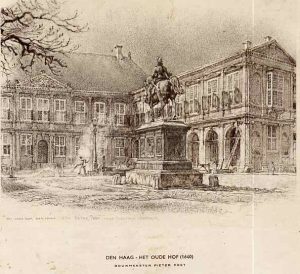 Noordeinde Palace used to be known as het  Oude Hof (the Old court).

The oldest part of the palace dates from before 1512. In that year the steward of the States of Holland had a homestead converted into a large house. From 1566 the house changed hands several times.

In 1595 it was bought by the States of Holland and made available to the widow of Prince William of Orange, Louise de Coliginy and as a thank you for the services provided by William of Orange. The States gave the house to his family in 1609.

After his death in 1647, his widow Princess Amalia regularly lived at the Oude Hof. From 1675 the house was not often used and after the death of the childless Stadtholder William III, the house passed into the hands of the Prussian King William, an heir to Frederik Hendrik.

In 1754 the house came into the hands of Prince Willem V, he had the famous balcony built, among other things.

In 1795 when the French invaded and William had to flee to England, het Oude Hof  became state and national property, which it still is today.

When hereditary prince Willem was proclaimed sovereign king in 1813, as laid down in the constitution, a residence had to be made available to him by the state. This resulted in a thorough renovation of the Oude Hof and in 1817 King Willem I took the newly named Noordeinde Palace into use.

Following her marriage in 1901 Wilhelmina, her mother Emma moved to Soestdijk palace and Wilhelmina and Hendrik continued to live in Noordeinde. In summer time, however, they could often be found in palace het Loo.

After the war, Wilhelmina opted for Het Loo and did not return to Noordeinde. She already hated the building, but because it had also  been used by the Germans, she refused to live in the palace any longer. In 1948 a part of the palace was destroyed by fire and when Wilhelmina heard about this, her response was “You don’t think I started the fire, do you?”.

Juliana made little use of the palace and her daughter Beatrix made it her working palace after a thorough restoration in 1984.

King Willem-Alexander has also used the palace as a working palace and for official receptions since his inauguration in 2013.

Opposite the palace is the equestrian statue of William of Orange.

In 1843 Emile de Nieuwerkerke a French sculptor of Dutch descent showed his design of this statue to King Willem II. The king then commissioned the sculptor to make the sculpture on a large scale. This was paid for by funds from the king himself.

The statue was cast in bronze in Paris and when finished in 1845 it was temporarily exhibited on the Champs-Elysées. It was transported by ship to the Netherlands and placed opposite the palace in The Hague on November 7th.

On November 17, the unveiling took place in the presence of the royal family. Queen Anna Paulowna watched from the balcony of the palace.

The statue can still be admired in the same place.

Below some silver spoons made as a souvenir of the palace by W Brehm silversmith from Schoonhoven working from 1924-1929. 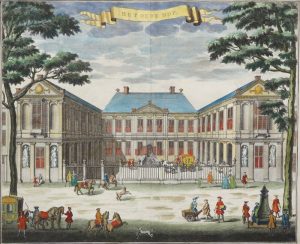 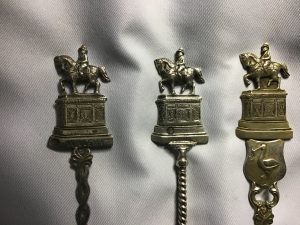