Since the death of Willem van Oranje, almost all members of the house of Orange have been buried in the Royal tomb in the Nieuwe Kerk in Delft. 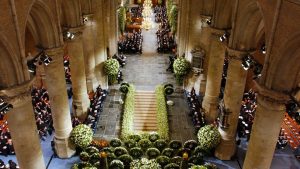 entrance to the royal vault

The last Stadtholder Willem Vth died during a visit to his daughter Louise in Brunswijk (Germany) and was buried there.

In 1958 his remains were transferred to the Netherlands and buried in Delft. Queen Wilhelmina refused to be present at this. It is said that she did not want to walk behind the coffin of a fool.

Following his abdication in 1840, King Willem I moved to Berlin where he died in December 1843. He did not want to be embalmed, so his body was placed in a lead box, but because this was not good enough this was placed in a second coffin and finally both placed in an outer mahogany coffin. All together it weighed more than 1000 kilos. The coffin was transferred to the Netherlands with much difficulty. All of the bridges on the route had to be checked for the deployment and in Delft the church had to be inspected in order to prevent the heavy coffin from sinking through the foundations.

20 people were needed to bring the coffin into the burial cellar, but when descending the stairs the coffin got stuck and had to be turned around, this upset the new king William II so he left the church being very upset.

King Willem II traveled to Tilburg in 1849 en route he had a nasty fall from his horse, however he traveled on to Tilburg. In the following days, his health deteriorated rapidly and on March 17th, three days later, he died in his armchair. His body was buried in the Royal burial cellar on April 4, 1849.

The Crown Prince Willem who became Willem III was not present as he was with a lady friend in England.

William III died on November 25, 1890 as a result of a stroke. The funeral took place on December 4th, but not without problems. Firstly, the coffin turned out to be too heavy (Willem was rather corpulent) and could not be lifted, so it had to be dragged over the ground. When the funeral procession was formed, it turned out that there were too few carriages, so that several Royal guests were crammed together in one carriage. In the church, the pastor started his argument too early and the organist made mistakes during his organ playing. Queen Wilhelmina later decided to prevent such errors during her funeral that a protocol had to be established. 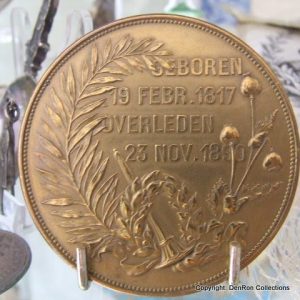 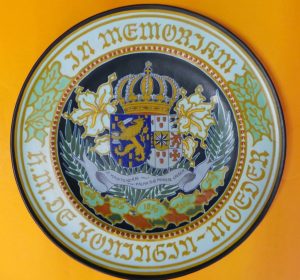 Queen Wilhelmina also opted for a white funeral. She died in 1962 and was laid out in the chapel of the Royal palace Het Loo.

On the coffin she did not want signs of Kingship but an open Bible. It was the funeral she wanted. It was also the first royal funeral that was broadcast live on TV.

The white funeral of Queen Wilhelmina

Princess Juliana died in her sleep as a result of pneumonia on March 20th 2004. From March 23rd she was lay in state in the palace Noordeinde in The Hague, where more than 50,000 people paid their respects. White was also the central colour at her funeral. 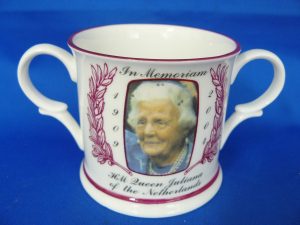 In memoriam mug princess Juliana made  in Engeland

After the death of a royal person, sometimes in Memoriam souvenirs of the deceased are made. A tradition that is not so popular in the Netherlands but common in Great Britain.

That is why not many in memoriam souvenirs have been made for members of the Dutch Royal family, however many items were made in memoriam for Queen Emma, ​​but practically nothing for Queen Wilhelmina. Here some more examples: