The inauguration of Queen Wilhelmina

It was already planned that the inauguration would take place in 1898 and thus there were 8 years to prepare for this auspicious event.

The date for the Inauguration was set for Tuesday, September 6th.

The day prior, mother and daughter arrive in the capital city Amsterdam, after which they made a tour in a  Crème Caléche through the elaborately decorated streets of Amsterdam.

The citizens of Amsterdam had partied in the city for days and the night before the inauguration, the partygoers were asked to keep the celebrations to a minimum on Dam Square so that her majesty could sleep peacefully.

On the day itself, Wilhelmina wanted her mother to walk along side her under the pergola from the palace to the church, but protocol did not allow this so Queen Emma went to the west entrance of the Nieuwe Kerk (which is actually the main entrance) by the glass carriage.

Wilhelmina wore the ermine trimmed royal mantle, which was slightly adapted for her petite size.

At 11.00 o’clock Wilhelmina entered the church. All invitees were already present, amongst them were for the first time, many Indonesian monarchs and princes and some members of European royal houses. Emma had a place on the podium; this was also the first time because during the previous inaugurations there was no family next to the monarch.

During the ceremony, which lasted just short of an hour, Wilhelmina spoke her speech crystal clear and without flaws, her voice was clearly audible everywhere, despite the fact that there were no microphones.

After the ceremony, she returned on foot to the palace, where she following a blast of trumpets, appeared on the balcony.

In the evening there was a large gala dinner in the palace on the Dam and after that the company went to admire the party lighting displays in the city. Wilhelmina did not want to receive gifts for her inauguration, so the gift from the people of Amsterdam “the Golden Coach” was not delivered until the following day, this was first used 3 years later for her marriage to Prince Hendrik.

The inauguration was such an important event that it had to be captured on film. Film had only existed for 2 years, so this was very special. However, inside the church itself no filming was allowed.

The souvenir industry also experienced golden times and for the first time, also because of new techniques, hundreds of souvenirs came onto the market that were in great demand.

Below are some examples from our collection: 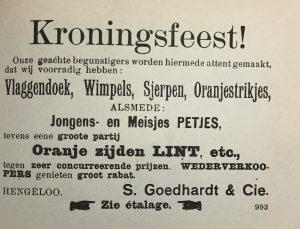 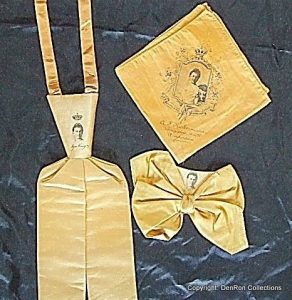 Advertisement for Orange bowties etc from 1898 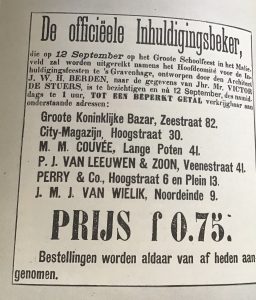 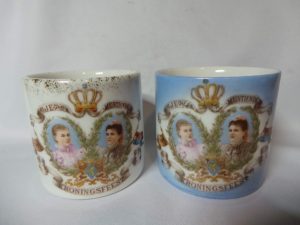