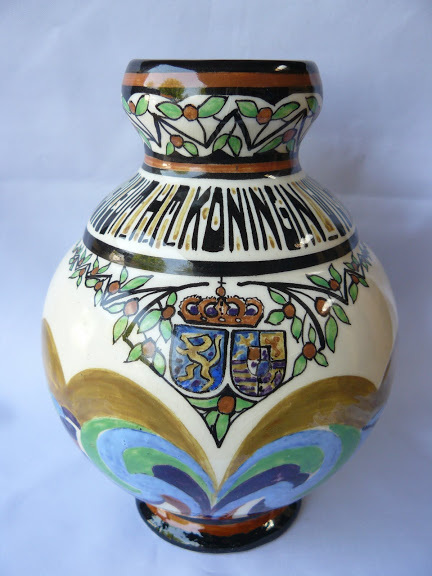 The pottery Amstelhoek was originally founded in 1894 by the Amsterdam goldsmith Willem Christiaan Hoeker.

The company had two specialties, they made design pottery and metal objects.

The manager of the pottery department was the famous Dutch designer, Chris van der Hoef.

In 1903 the company went broke and the pottery side went on with the new name; “Factory for pottery of household and design items formerly known as Amstelhoek”. In 1910 the company was sold to the Distel pottery in Amsterdam.

In 1898 Amstelhoek made a large mug for the inauguration of Queen Wilhelmina.

On the front is a crowned queen Wilhelmina in her coronation robes surrounded by sunbeams/ on the rim the text 6th of September 1898 enthroned.

These items were made in a limited number in the colours powder blue, canary yellow & emerald green and are rare. Also a similar, very rare jug made in olive green. 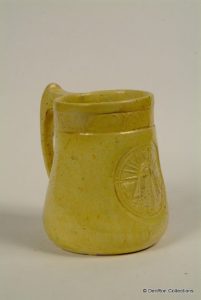 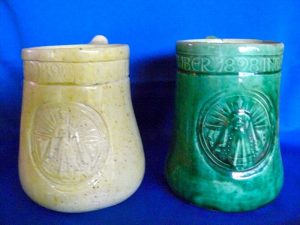 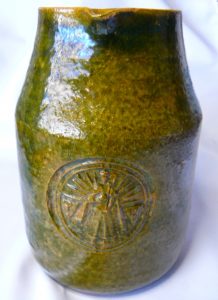 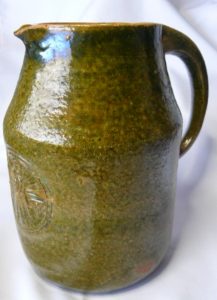 In 1918 Hillebrand Ras and his uncle Hein Krop had plans to found a ceramic factory. Ras was an art teacher and owner of a paint and wallpaper shop. Krop was an Alderman of the city of Steenwijk.

The factory was built near the railway and opened in 1919. They started production in 1920, one of the first designers was W H Norden who had worked for the Amsterdam company the Distel. The pottery had a special scarabee stamp.

In 1923 the factory made a vase to commemorate the silver jubilee of Queen Wilhelmina. They also made a large wall charger of the same design, both are very rare and much sought after by ESKAF collectors. 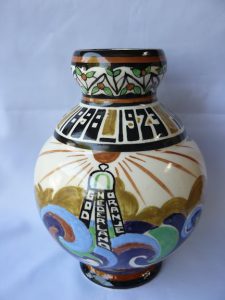 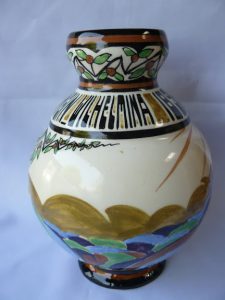