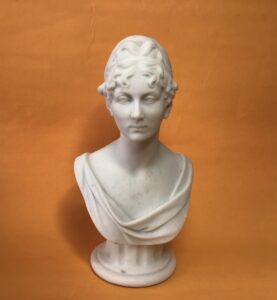 New in our collection is this rare bust of Frederica Wilhelmina Louise princess of Prussia and from 1791 after her marriage to Prince Willem Frederik van Oranje-Nassau the later King Willem I, hereditary princess of Orange.

In 1815 she became the first “Orange” Queen of the Netherlands. Elsewhere on the History page there is an extensive piece about her.
The statue is about 17 cm high and made of biscuit porcelain.
It is made in Germany by the porcelain factory Fürstenberg. This factory was founded in 1747 and still exists today.
The modeler and sculptor of the statue was Karl Heinrich Schwarzkopf, (1763-1846) a pupil of Johan Gottfried Schadow who, among other things, made the famous chariot that stands on the Brandenburg Gate in Berlin.
Karl Heinrich Schwarzkopf has also created busts of Napoleon and his brother Jerome Bonaparte.
The statue was made in 1807 when she was 33 years old.
A similar image /bust is also in the collection of the Rijksmuseum in Amsterdam. 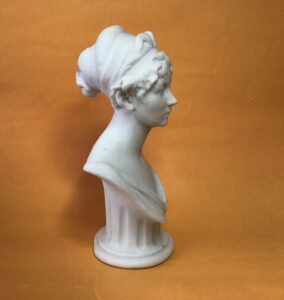 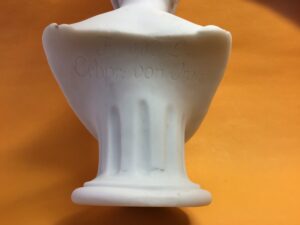 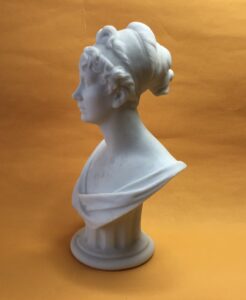