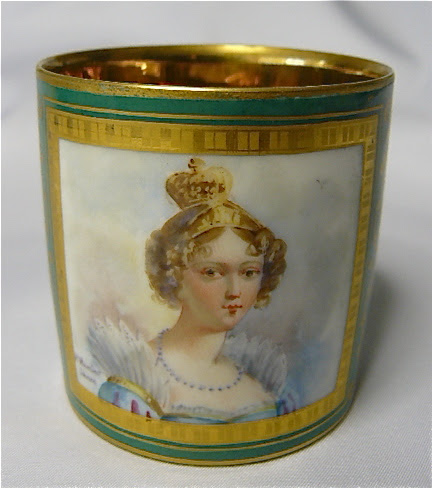 Louis Napoleon was born on September 2, 1778 in Corsica. He had four brothers one of which was Napoleon Bonaparte, the future Emperor of France.
Louis Napoleon married with Hortense de Beauharnais in 1802 and had three children. One of his sons, Charles Louis Bonaparte, was to become Emperor Napoleon III of France.

Louis served in his youth under his brother Napoleon in the army. After his return to France, Louis at age twenty-five was appointed General in 1799 and took part in the coup of Napoleon to defeat the Directoire. After Napoleon had crowned himself emperor, he pronounced his brother on June 5th 1806 the king of Holland (which is why the Dutch dislike their country The Netherlands being referred to as “Holland”).

King Louis-Napoleon
Louis was received with suspicion, the Dutch were not happy that their Republic after centuries was replaced by a monarchy. By administrative reforms, new legislation, his performance during the major floods in the Betuwe, Louis won, however, more and more popularity among his subjects. Louis even ignored orders several times from his brother who went against the interests of the country. This earned him the nickname in Holland of Louis the Good.

The behavior of his brother was a thorn in the side of Emperor Napoleon and Lodewijk was deposited on July 1, 1810 as King and went into exile in Austria.

He died on July 25, 1846. Holland was annexed by the French Empire until 1813 when it became the Kingdom of The Netherlands under King Willem I. 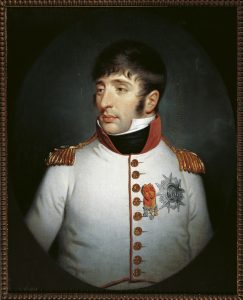 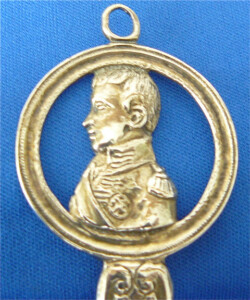 Hortense Eugenie Cécile Bonaparte, Queen Consort of Holland.
She was the stepdaughter of Emperor Napoleon I, being the daughter of his first wife, Joséphine de Beauharnais.

Later became the wife of the former’s brother, Louis Bonaparte, King of Holland, and the mother of Napoleon III, Emperor of the French.
She was Queen of Holland from 1806-1810. Their marriage did not work out and she lived by herself in Paris for a while (not liking Holland at all) but Napoleon sent her back to Holland where she and Louis lived in the Palace on Dam Square in Amsterdam. She died of cervical cancer on the 5th of October 1836 in Switzerland. 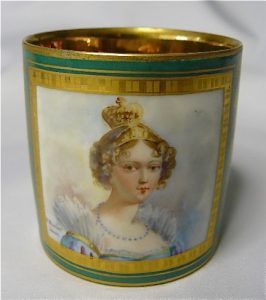 Cup with portrait of Queen Hortense

Hortense Eugénie Cécile Bonaparte , Queen Consort of Holland, was the stepdaughter of Emperor Napoleon I, being the daughter of his first wife, Joséphine de Beauharnais. She later became the wife of the former’s brother, Louis Bonaparte, King of Holland, and the mother of Napoleon III, Emperor of the French. She was Queen of The Netherlands from 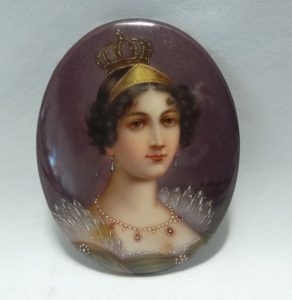 Porcelain plaquette made in Firenze Italy of Queen Hortense ca 1806. 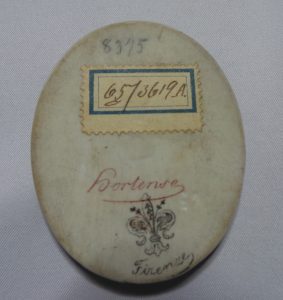