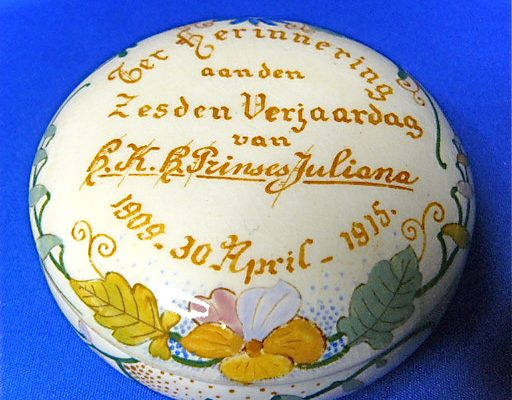 In 1885 on August 31st, the fifth birthday of Princess Wilhelmina was celebrated for the first time. This princess’s day was an initiative of the liberals. They wanted to emphasize national unity with this celebration. After the death of King Willem III in 1890, Wilhelmina became Queen and a year later the Queen’s birthday was first celebrated in the Netherlands, also known as Queen’s Day. August 31st fell on the last day of the school holiday, making this day a holiday for children. The Queen herself did not participate in the festivities. It was not until 1902 that Queen’s Day grew into a true party for the people. People also celebrated the news that Wilhelmina had recovered from a serious illness (typhus).

When Wilhelmina turned 50 in 1930, her birthday fell on a Sunday so that most of the festivities were organized on the Saturday before or on the following Monday.

The Netherlands suffered from a heat wave, but nevertheless there were various festivities in villages and towns such as games, music events, sports competitions etc.
When Juliana took over in 1948, Queen’s Day was now held on her birthday April 30th. The first time this was celebrated was in 1949 and from that time on it was also an official national holiday.

Juliana and her family admired a parade of her folk on that day from the steps of Palace Soestdijk.

Thousands of Dutch people then walked past the Royal family and gave flowers and gifts to the birthday Queen.

Since 2014 we have been celebrating King Willem-Alexander’s birthday on his birthday April 27th, now known as King’s day. On that day, the King and his family with other members of the Royal Family visit a municipality in the Netherlands that plays a central role in that region.

A royal birthday is of course perfect for issuing a commemorative souvenir. This usually happens when a member of the Royal family reaches a crown-year such as an 18th or 50th birthday. Below some birthday souvenirs from our collection: