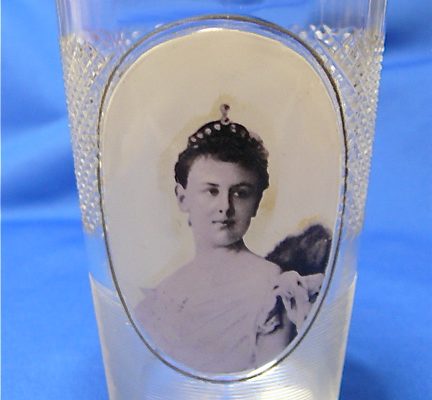 A special form of glass art is the portrait glass. Portraits of royalty, soldiers and other famous persons were depicted on it.

The first portrait glasses date from the early 17th century. The portraits were then front facing later in the 18th and 19th centuries and this became profile, in general, only busts were depicted.

For special events such as battles etc. a date was added.

In the second half of the 18th century, a glass technique called dot technique was developed in the Netherlands.

These decorations are composed of countless fine dots, which were applied with a diamond tip and a small hammer. There are glasses of Stadholder Willem V and his wife that were made with this technique.

At the end of the 18th century, this type of glass was no longer made and the etched glass became fashionable.

The work piece is covered with a wax layer, after which figures are drawn with an etching needle. The glass is then etched in a hydrofluoric acid bath.

The unprotected parts of the glass are etched and given a matt appearance.

This technique was not only used on glasses but on all kinds of glass utensils such as water jugs, vases etc.

With the introduction of pressed glass in the mid-19th century, a new era in glass art began. These glasses were inexpensive and could be mass-produced, for example, in 1898 the Dutch Leerdam factory made glasses from pressed glass with portraits of European monarchs, including a series of Queen Wilhelmina.

Even today, glasses with a Royal portrait are made for special royal events, such as the inauguration of King Willem-Alexander in 2013. 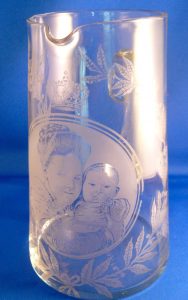