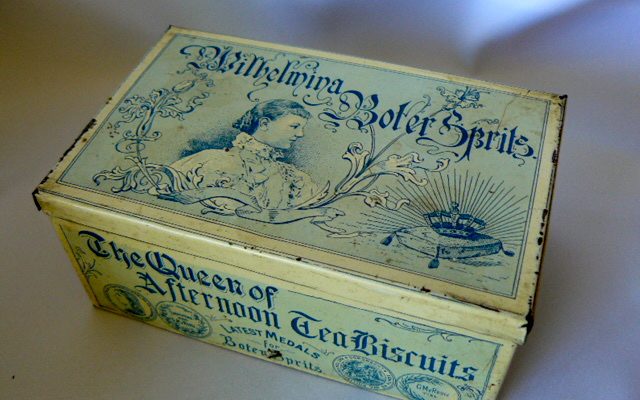 Tinplate is a thin-rolled sheet of steel. Originally a thin layer of tin was applied to prevent rust. The name “blik” (Dutch for a tin) probably dates from the mid-seventeenth century. In Dordrecht, lantern makers made cans of sheet iron with a thin layer of tin. They called themselves Blikslagers. In the 19th century, companies were established in the Netherlands that started producing biscuits, cocoa, etc. on a large scale.
They started using tins to package their goods. In the beginning, tins were decorated by hand, but at the end of the 19th century it was possible to put a print on the tin with a lithographic printing press. In particular, luxury items such as cocoa, tea and biscuit were put on the market in beautifully printed tins.
Some factories employed special designers to design a beautiful tin. Thus the portrait of Queen Wilhelmina was used by various companies to make their tins looks extra beautiful. The young queen was very popular and provided for extra sales. For example, tins were made for her birthday, inauguration, marriage and jubilees.
Especially in the Zaan region there were many biscuit, and cocoa factories.

This created a whole tin industry to meet the demand. One of those factories was the Verwer Company from Krommenie.
For example, this factory has made two tin commemorative cups for Queen Wilhelmina’s 18th birthday, one given to the school children of Zaandam and one issued in Haarlem. Tins can last a long time, but can also be damaged quickly, so dents, rust or scratches can occur. Tin collectors therefore pay a lot of money for an old, rare and good-looking tin. Even today, a lot of tins are still being produced including decorative tins. A very popular one is the Wilhelmina peppermint tin; unfortunately they are no longer as beautiful as the cans from the 19th and early 20th century.

Here some examples from our collection: 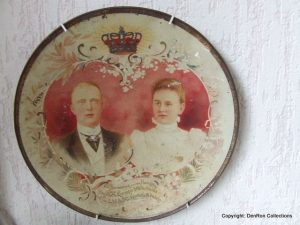 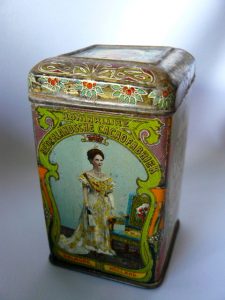