From 1715 to 1837 there was a personal union between England and Hannover (a construction in which two states have the same head of state). In that year the Elector of Hanover, a great-nephew of Queen Anne who died without an heir, became King George Ist of England.

In 1803 the French occupied Hannover. Part of the army immigrated to England as the Kings German legion.

In 1813, after Hannover was liberated from the French, the personal Union remained. The Kings German legion returned to Germany as two hussar regiments.

Hanover was taken by Prussia in 1866. After this the two hussar regiments were merged into one regiment, the Hannoversches Husaren regiment No. 15. Until 1898, the regiment belonged to Prince Hendrik’s brother.

After her accession to the throne in 1898, Kaiser Wilhelm II appointed Queen Wilhelmina chief of the regiment. This was an old custom that dates back to the time before the French revolution. It was common then for a regiment to be named after usually a Colonel or a monarch.

The regiment wore a uniform of dark blue as the ground color with yellow trim and silver cords and braids. From 1898 to 1919 they wore a crowned “W” on their shoulders.

The Dutch also served in this regiment, this was possible because Wilhelmina as chief could recommend young men for training as officers. These were always noblemen. In October 1904, Queen Wilhelmina and Prince Hendrik went to Dobbin Mecklenburg in Germany for 6 weeks. She started painting and horse riding and he went deer hunting.

They also made a trip to the Hannover regiment of which she was chief.

The commander complimented Wilhelmina on her horseback riding.

After the First World War, these traditions were not continued in the German army.

As a reminder of their service in the regiment the men received napkin rings with portraits of Queen Wilhelmina and of a hussar on horseback.

The book “Wilhelmina” by Cees Fasseur 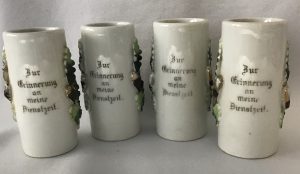 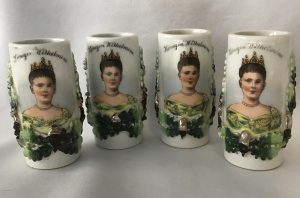