The Wedgwood majolica plaque of William the Silent 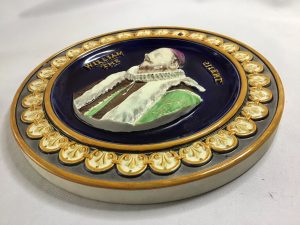 New in our collection is this very rare plaque of William the Silent.

Why William of Orange was given this nickname is not known.

This plaque was made in England by Wedgwood in 1875 in the majolica style and went well with the Victorian taste for brightly coloured and decorative items. So popular did this form of decoration prove to be that almost everything was made in majolica and outnumbered all other ornamental wares.

Majolica is a degenerate from the Spanish word Mallorca, Mallorca was the centre in the middle ages for making this type of pottery. 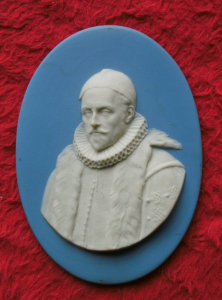 The portrait was based on a painting of William of Orange by Michiel van Mierevelt.

Wedgwood began making majolica in 1861 usually they marked there wares with an impressed mark of Wedgwood on the reverse.

From 1890 till 1909 they marked the items with “Wedgwood England” and from 1910 with “Wedgwood Made in England”. Since 1910 Wedgwood stopped making majolica items.

Noticeable is that the S & the N in “Silent” on the plaque are in mirror image, why this is, is not known to us. 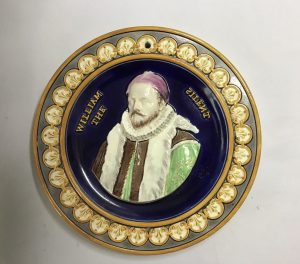