Towards the end of the 19th century buttons were produced in the USA as a low cost alternative to medallions and enamel badges who were expensive to make. As they were the size of a button they got the name button badge. These days they are simply known as buttons.

The invention of celluloid in 1869 gave the world its first semi-synthetic plastic which was crucial in the development of a whole range of products including badges.

Thin sheets of celluloid could be used to cover paper and give the effect of the traditional enamel badge.

All that was needed was a printed image and a thin sheet of celluloid to cover it. This was pressed over a thin metal shell, a pin was attached to the back so that the button could be fixed to an item of clothing.

Benjamin S Whitehead thought of this idea and in 1893 he patented this.

Some of the first buttons to appear in the UK were produced to celebrate the diamond jubilee of Queen Victoria in 1897.

In The Netherlands the first buttons were made to commemorate the inauguration of Queen Wilhelmina in 1898.

For her wedding to prince Hendrik in 1901 and for the birth of princess Juliana in 1909 buttons were also made to celebrate these events.

Buttons have always remained popular and were made for all kinds of purposes, also to commemorate Royal events such as the wedding of prince Willem- Alexander & Maxima in 2002.

Button of Queen Wilhelmina made in the USA by pepsin Gum co. ca 1898 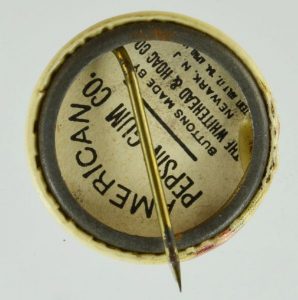