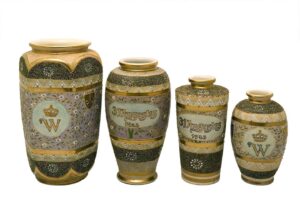 These vases are in the van Geybland-Oosterhoff Collection
Photo© University of Pretoria Museums ( used with permission)
Satsuma pottery is originally a type of Japanese pottery that was made with a type of clay that was found in the Japanese province of Satsuma. The stoneware was covered with a coagulated glaze.
Later around 1800 pottery was produced which was tinted light brown and covered with a lot of relief, enamel glaze and gold. From then on this was called Satsuma pottery.
This type of Satsuma pottery was highly valued in the west, as it was seen as typically Japanese.
This kind of Satsuma pottery was mainly made for export and due to the high demand from the west it was made in many workshops in different cities. From then on Satsuma was no longer associated with the place of origin but with the type of pottery.
The Netherlands has a long history of trade with Japan, and in 1923 a clever businessman probably thought of having Satsuma vases and plates made for the silver jubilee of Queen Wilhelmina through workshops in Japan and to export them to the Netherlands.
For this royal jubilee, Satsuma vases were made in various sizes and shapes. We do not know how many different sizes and designs were made. The souvenirs bear the birth date of Queen Wilhelmina August 31st and the date 1923. On the back is a crowned “W”. The items are marked with red Japanese characters and “Made in Japan”.
According to information from the University of Pretoria art collection, the Nagoya factory made the vases. This university in Pretoria has a large collection of objects, memorabilia and publications related to the Dutch Royal Family called the van Geybland-Oosterhoff collection.
Here below are some examples from our collection. 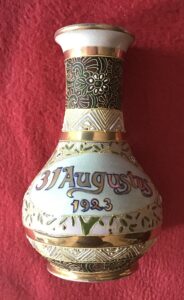 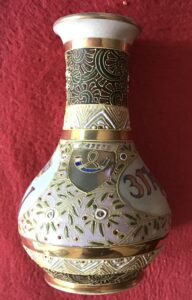 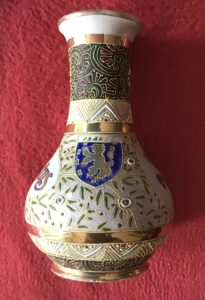 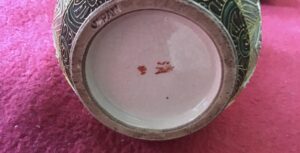 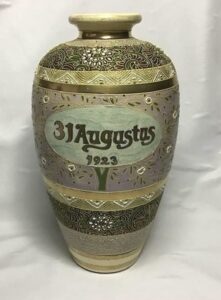 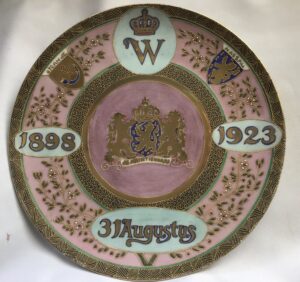