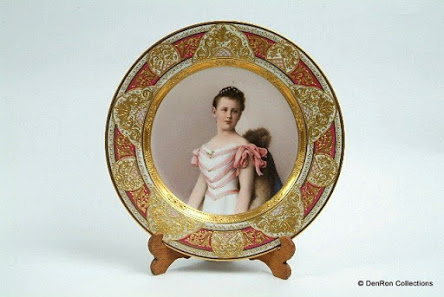 The name Royal Vienna (known as Viennese porcelain) refers to a style of porcelain that was very popular in the late 19th and early 20th centuries.

There were several factories that made this kind of porcelain made especially in Austria and Germany. They produced beautiful portraits in this style all hand-painted, signed and of the highest quality they are much sought after by collectors.

Portraits of royalty, nobility and the famous were depicted. Pure 22 carat gold is used for the decoration on the plate.

This plate with the portrait of Queen Wilhelmina was painted in 1898 on the occasion of her inauguration as Queen of The Netherlands, we have been informed there are only two of these plates made; one in possession of the Dutch royal family and this one in our collection. 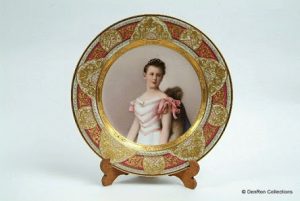