Queen Wilhelmina and the chocolate factories.

The Netherlands has traditionally played an important role in the cocoa trade and has a rich history of cocoa and chocolate factories, which mainly settled in the Zaans region.

The cocoa beans that were grown in their own colonies or bought at trade markets were shipped to the Netherlands. There the beans were hulled, roasted and ground in mills and later factories. In 1828 Casparus van Houten discovered how the fat could be removed from the beans using potassium hydroxide, resulting in cocoa powder and cocoa butter. This was the basis for today’s chocolate.

The various chocolate factories have marketed occasional items for various important royal events. Some of these we’ll showcase below.

The factory was established in Helmond in 1894.

Technical director Malsch learned the trade at Van Houten in Weesp. In the beginning, the factory only made cocoa powder, but from 1900 also chocolate products etc.and in 1904, the company acquired the designation of “Royal”.

In 1908 it was taken over by an English company. In 1932 all production was transferred to England. This cocoa factory brought a cocoa tin onto the market to mark the silver jubilee of Queen Wilhelmina in 1923. 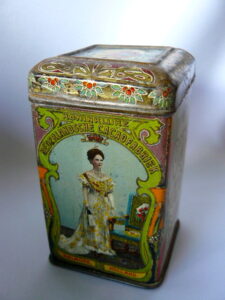 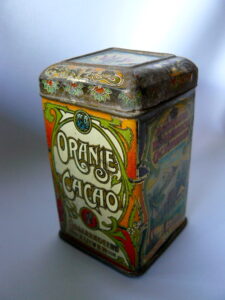 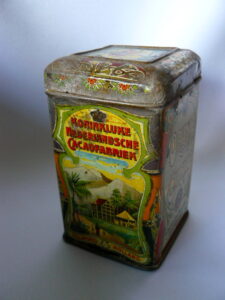 The Driessen factory had been located in Rotterdam since 1820 and the cocoa and chocolate factory was put into use there in 1854. In 1871 it became purveyor to the Royal Household and by the end of the century it was one of the most important chocolate companies in the Netherlands. It was taken over by Kwatta and this is how this once well-known company came to an end. Around 1890 the company launched Wilhelmina chocolate on the market, a 125 gram tablet costing 30 cents.

Driessen made an earthenware bonbonnière for the silver jubilee of Queen Wilhelmina in 1923, a beautiful box with chocolate also tablets of chocolate with the Queen on the wrapper.

Special royal house chocolate tablets have also been made. 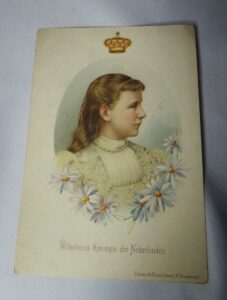 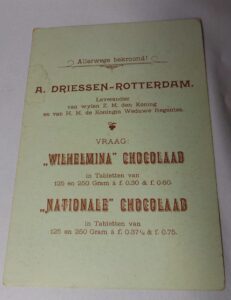 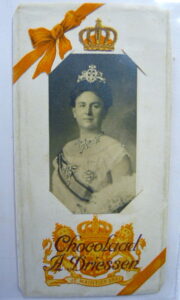 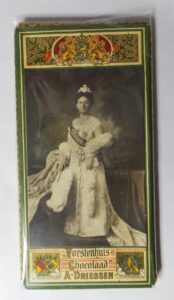 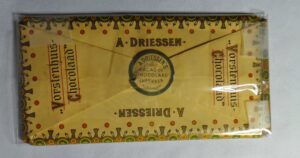 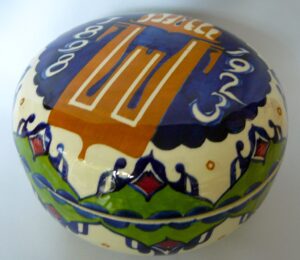 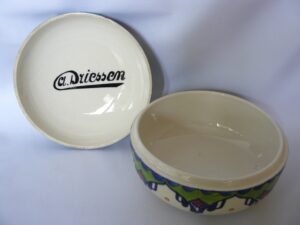 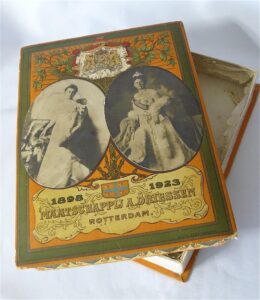 In 1866 a second factory was built in Bussum and in 1826 the Amsterdam factory was closed and everything was transferred to Bussum. At the beginning of 1900 branches were opened in Germany, Austria and later also in Cape Town, South Africa. In the fifties Bensdorp had 103 stores, in 1962 Bensdorp was taken over by Blooker.

We only have an advertising item from Bensdorp in our collection in 1898 on the occasion of the inauguration of Queen Wilhelmina. 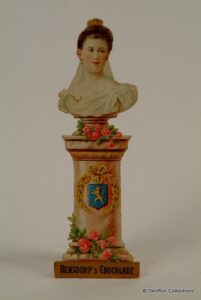 Droste is a chocolate company founded in Haarlem in 1863 that still produces chocolate pastilles (buttons) etc.

Droste is not only known for its chocolate but also for the Droste effect…the picture of a nurse with Droste cocoa in her hands became known everywhere.

Droste has been taken over by other companies several times and is now owned by a German company.

In 1898 Droste made a promo display for chocolate pastilles. 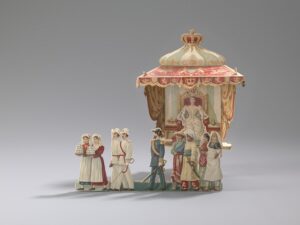 In 1923 Droste brought two different boxes of chocolate onto the market to celebrate the silver jubilee of Queen Wilhelmina. 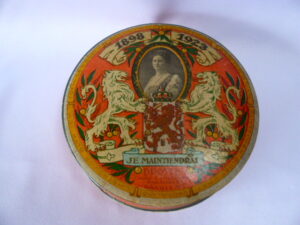 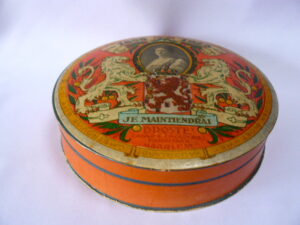 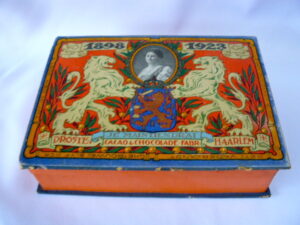 Since they were consumables, not much of the contents will be in a good condition at present.

These sorts of promo items are very popular with collectors and are sometimes sold for a lot of money.