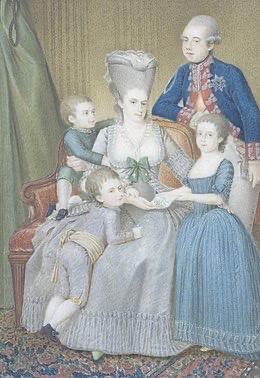 by denron
History
0 Comment 12
Princess Wilhelmina was born on August 7, 1751 in Berlin. Her parents were Prince Augustus of Prussia and Duchess Louise Amalia of Brunswick-Wolfenbüttel. At an early age she was taken away from her parents and raised by her grandmother Sophia of Hanover, husband of King Frederick William of Prussia and daughter of the British King George I.
She was only 16 when she married the Dutch Prince Willem V. 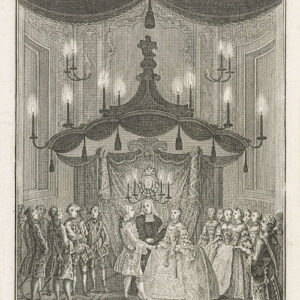 Marriage of Willem V and princess Wilhelmina
The princess was very involved in the duties of her husband hereditary stadtholder of the republic of the United Netherlands.
She was very decisive and had a lot of influence on policy, but the turbulent political scene of the 18th century proved unfavorable for her husband Willem V and he lost more and more ground and authority.
In 1786 he had to leave The Hague the centre of politics and went with his family to Nijmegen.
The following year, Princess Wilhelmina went “incognito” to the States of Holland in The Hague to talk to them about her husband’s return. On June 28, 1787, she was stopped by the patriotic opponents of the “Orange” Prince William V and she was brought by armed civilians to a farm in Goejanverwellesluis where she was held captive.
During her imprisonment she wrote a letter to the States of Holland to explain why she wanted to travel to The Hague in order to prevent a civil war. She never got an answer and eventually she was allowed to return to Nijmegen. 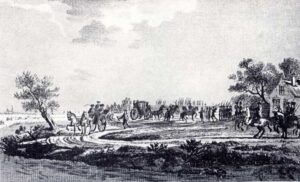 Stopped at Goejanverwellesluis (foto public domain)
The brother of Wilhelmina, the new King of Prussia, took the insult to his sister very seriously and he invaded the country at Nijmegen with an army of 20,000 men as far as The Hague. As a result, peace and the stadholder’s authority were restored.
In 1795 the Netherlands came under French rule and the family had to flee to England.
From 1802 to 1806 she lived alternately in Diez, Brunswijk and Nassau and later, after her husband’s death, in Schwerin, Weimar and Berlin. On January 10, 1814 she returned to the Netherlands.
Princess Wilhelmina went to live in Haarlem in Paviljoen Welgelegen, which she received on loan from the state as the mother of King Willem I.
Especially in the summer months Willemijntje, as she was often called, stayed here. Here she received, among others, Tsar Alexander of Russia and her daughter Louise and her husband often came to visit. After the death of her daughter Louise in 1819, Willemijntje moved to Het Loo where she died a year later. 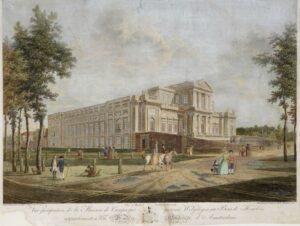 Paviljoen Welgelegen then ( photo public domain)
She was buried in Apeldoorn and two years later she was interred in the vault of the Oranjes in Delft.
Princess Wilhelmina or Willemijntje was often portrayed on commemoratives, here are some examples from our collection: 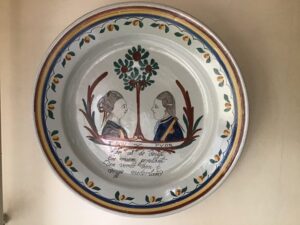 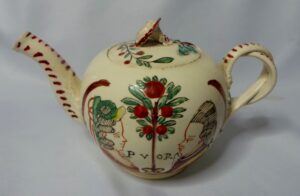 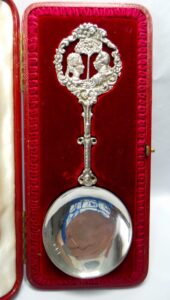 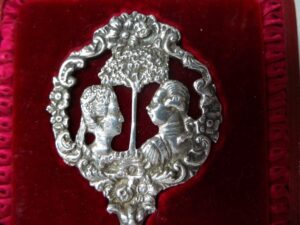