After Prince Willem Frederik was proclaimed sovereign monarch of the Netherlands in 1813, he started building a professional army. When Napoleon had fled his place of exile in Elba in 1814 and was on his way to Paris to restore his power, the Dutch army was given the baptism of fire.

The former opponents of Napoleon; England, Russia, Austria-Hungary and Prussia agreed to gather a joint army to deal with Napoleon for good. The newly formed Kingdom of the Netherlands also joined in.

To get ahead of them, Napoleon started an offensive, in June he directed his troops towards Brussels, where the British led by Wellington, the Prussians led by Blücher and the Dutch led by Crown Prince Willem, the Prince of Orange (later King Willem II) had begun to set up their troops.

Napoleon had quickly pushed the Prussians back and hoped to do the same with the English and Dutch before the Prussians recovered.

The Prince of Orange was at a party in Brussels when he heard that Napoleon was approaching, still in gala uniform he drove to Quatre-Bras a strategic point. Wellington ordered the Prince of Orange to leave that place, but Willem refused. A battle ensued between the French and Dutch troops, which seriously delayed Napoleon’s advance.

On June 18, a violent battle broke out at Waterloo in which the English fought the French together with the Dutch, led by the Prince of Orange.

The prince showed himself to be a good leader but was injured by a bullet in his shoulder forcing him to leave the battlefield. Towards the evening the Prussian army also came to the rescue and Napoleon was finally defeated.

Through his performance Willem became a celebrity both in the Netherlands and abroad. A true Waterloo mania developed in the Netherlands, statues were erected and his father King Willem I had a monument built “the Lion of Waterloo” at the place where his son was injured.

Willem was the first to receive the Grand Cross of the Military Order of Willem and it was also determined that Willem would receive the hunting lodge Soestdijk as a gift and that it would be converted into a palace worthy of a hero.

Prince Willem’s  horse “Wexy” had survived the battle and later died at the age of 38. Willem had the horse Wexy mounted by a taxidermist as a tribute and can still be admired in the Royal stables.

Napoleon later said that without the heroic contribution of the Prince of Orange at Quatre-Bras he could have easily defeated the English.

Many souvenirs have been made of this historical event and a number of examples from our collection: 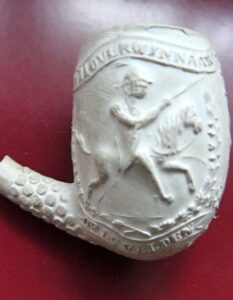