Willem Ist was born on the 24th of august 1772 in the Hague and was named Willem Frederik Prince of Orange Nassau. He was the third son of stadholder prince Willem V and his wife Wilhelmina of Prussia. His two elder brothers remained nameless and died shortly after birth. Making Willem the heir to become stadholder . Willem marries his cousin Wilhelmina of Prussia in 1791 the couple have 5 children. Wilhelmina died in 1837.

When in 1795 the French occupy the Netherlands prince Willem V and his family fled to England.

By 1813 the French lose power and support and a group of notables from The Hague ask Willem to return to The Netherlands. On the 30th of November 1813 he sets foot on Dutch soil by landing on the beach of Scheveningen. On the 30th of March 1814 he is inaugurated as sovereign monarch of the Netherlands in the new church of Amsterdam.

In 1815 after the fall of Napoleon at he congress of Vienna The Netherlands and Belgium became one country and Willem became King of the Netherlands. On the 21st of September he was inaugurated as King in Brussels. In 1815 he also became Grand Duke of Luxembourg.

On the 7th of October 1840 he abdicated in favour of his son. He is then known as King Willem Frederik count of Nassau.

In February 1841 he married again to the catholic countess Henriette d”Oultremont de Wegimont in Berlin. This is also where he died on the 12th of December 1843 at the age of 71. During his reign he gathered a fortune and in 1835 this was estimated at 200 million guilders.

Souvenirs of Willem Ist are rare. We have some items mostly made of Brussels porcelain made to commemorate his inauguration as King.

Pewter figurines of the arrival of King Willem I at Scheveningen 1813. 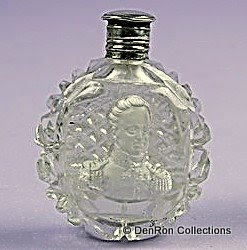 Perfume bottle with portrait of King Willem I ca 1815. 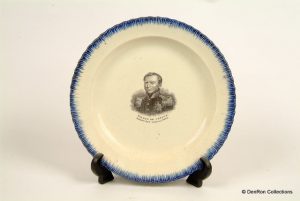 Creamware plate  made in England for the Dutch market with portrait of King Willem I ca 1815. 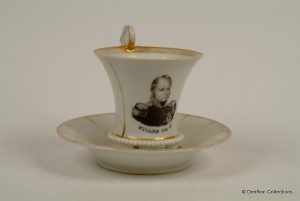 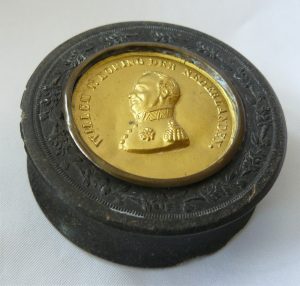 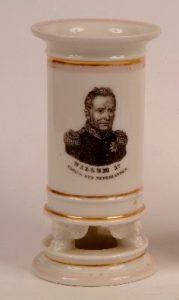 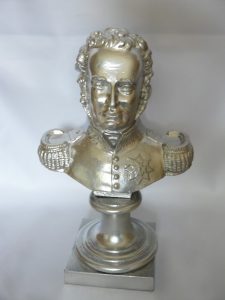 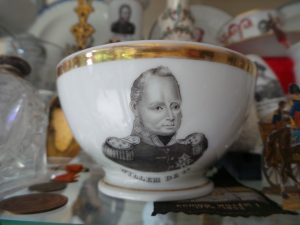