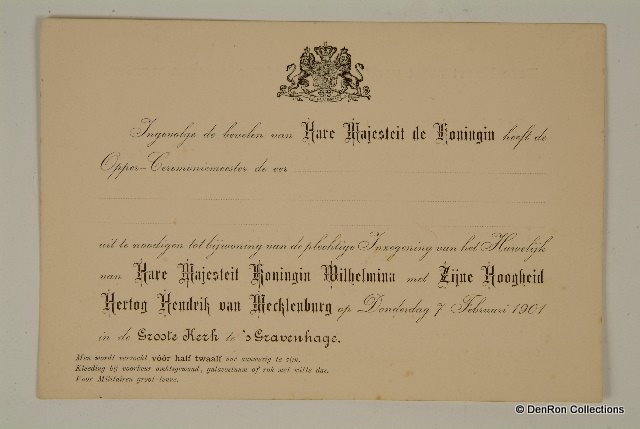 Following the inauguration of Queen Wilhelmina in 1898, Queen Emma started looking for a suitable partner for her daughter. British candidates were off limits due to the Boer war in South Africa where they stood at opposite ends of the conflict.
The search then turned to Germany. In 1900 Queen-Mother Emma traveled to the castle Schwarzburg in Thüringen for three pre-arranged meetings with possible candidates. Friedrich Wilhelm of Prussia and the two brothers Dukes of Mecklenburg-Schwerin. In the end Heinrich (Hendrik in dutch) the only one of the brothers who showed up was chosen.
The announcement of their engagement was made in October. 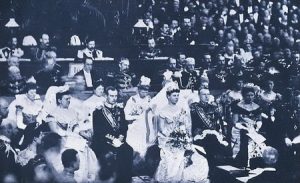 Wilhelmina and Hendrik had met briefly in 1892 at the golden wedding celebrations of her aunt Sophie of Weimar. A few years later in 1898 they both attended a wedding in Cannes but Wilhelmina developed tonsillitis so could not participate in the festivities and so they never actually met each other.
The civil wedding took place in February of 1901 at the palace Noordeinde in the Hague followed by the religious church ceremony at the St Jacobs church. The couple spent their honeymoon at the palace Het Loo in Apeldoorn.

Here are some rare souvenirs from our collection that were made for this occasion:
The wife of the Dutch ambassador to Spain commissioned a dinner service bearing the portraits of Wilhelmina and Hendrik. Here are a few articles from this service:

A rare glass made in Germany showing the combined coats of arms of Wilhelmina and Hendrik. 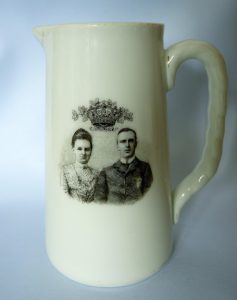 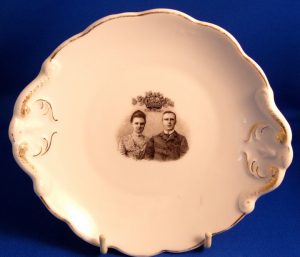 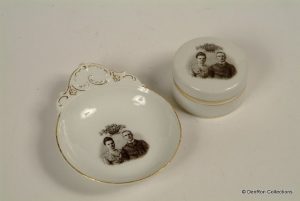 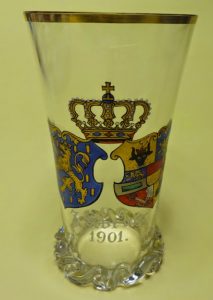 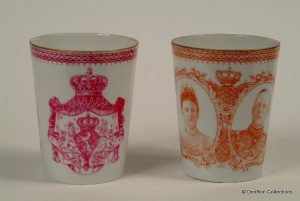 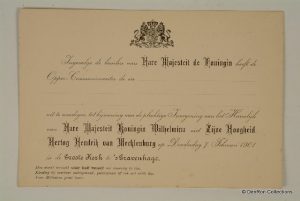 invitation for the church wedding of Queen Wilhelmina & prince Hendrik