Queen Wilhelmina celebrated her 40th jubilee in 1938, this was celebrated exuberantly throughout the country. The Dutch factories produced a plethora of cups, plates and other souvenirs for this occasion. However, what is not generally known is that a plate was made for this occasion in England. It is a plate made by the British porcelain factory Paragon. The factory was founded in 1897 under the name Star porcelain. From 1900 onwards the name Paragon was used. In 1960 the factory was taken over several times by other companies and it eventually became part of Royal Doulton. The factory made bone china a type of porcelain in which, among other things, finely ground animal bones are processed. This makes this type of porcelain extra hard, making it less likely to damage. The name Paragon is still used but nowadays mainly porcelain with flower decorations is made. The factory has made a lot of porcelain to commemorate Royal events of the British Royal family; these are still very popular with collectors. The British Royal family also had a lot of porcelain made by Paragon. For example, in 1930 the Duchess of York had a tea set made for the birth of Princess Margaret. The plate made for Queen Wilhelmina’s jubilee was made with permission from the Royal Family (by appointment). A similar design was used a year earlier in 1937 for a commemorative plate made for the coronation of King George VI. 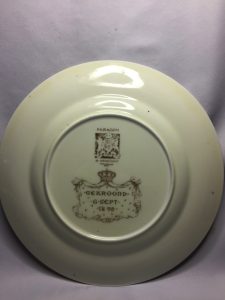 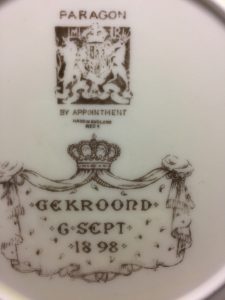