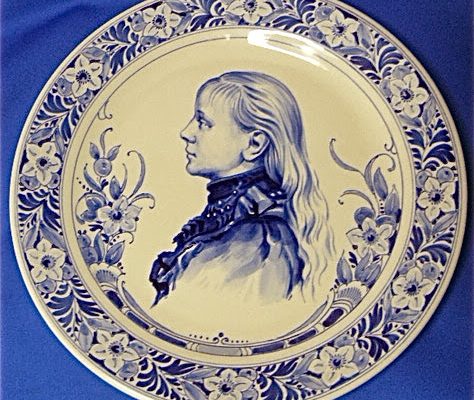 After the establishment of the VOC, in addition to tea and spices, Chinese porcelain was also introduced in the Netherlands.

This created a gap in the market and the pottery “De Porceleyne Fles” was founded in 1653 in Delft. The factory still exists and is one of the oldest remaining pottery factories existing. Among other things, the factory made a plate for the inauguration of Queen Wilhelmina in 1898 their  first commemorative plate.

From 1915 to 1977 Cloisonné tiles were also made, including some for a royal event such as the birth of the princesses Margriet and Christina.

In 1919 the factory was awarded the designation “ROYAL”.

There is, however, a mysterious plate made by the factory in 1984, it is a blue and white painted portrait of Queen Wilhelmina from 1890 in mourning attire. We bought this plate years ago from an auction in America. Since we have never encountered this plate since then, we have contacted with the Porceleyne Fles factory asking what the reason was for them to make this plate in 1984 (Year Code DD).

The factory knows of its existence as they have a black and white photo of the board in their archive. However, the plate was never issued as a commemorative plate and why only one was made at the time is unknown to them. They indicated that they always had believed that this was a portrait of princess Juliana as a child and because Juliana turned 75 in 1984 they thought this was made as a commemorative for her. Following our enquiry they now see that this is Wilhelmina and it remains a mystery to the factory why this plate was made.

We would welcome any additional information on this plate. 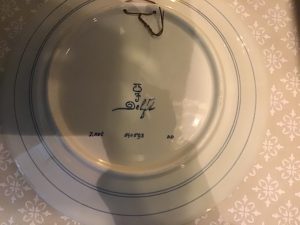