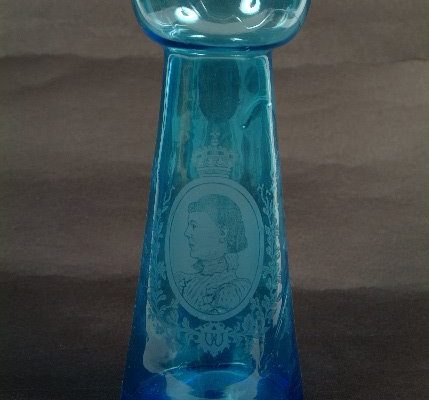 What is the significance of a bulb glass? According to the large Dutch dictionary from 1898, it is a peculiar shaped glass made to enable flower bulbs bloom in it.

The reason to start growing bulbs in a glass container/vase in the early 18th century was probably to show how these bulbs grew into flowers.

Bulb growers settled in Haarlem and surroundings in the first half of the 17th century due to the climate and the soil. Bulbs were very valuable at this time and since the 18th century, the hyacinth in particular, has been the most popular bulb for flowering in glass.

In that period a true mania for hyacinth bulbs arose after Madame de Pompadour, the mistress of the French King Louis XV, had decided that the Royal gardens in Versailles should be decorated with Dutch hyacinths. A flower bulb then sold for 1600 guilders, the bulbs eventually became cheaper in the 19th century.

Flower bulb glasses/vases were made by various factories including the Leerdam glass factory and are still loved by many households in this day and age.

In 1895 most catalogues and reference books were lost in a major fire at the Leerdam factory, but it is known that the factory had already made flower bulb glasses at that time. The oldest catalogues date from the early 1900’s.

We have a Leerdam bulb glass in blue from 1898 in our collection with an etched portrait of Queen Wilhelmina on it, it was made on the occasion of her inauguration.

A few years ago the secretary of the Dutch flower bulb club had seen a photo of this glass on our website and asked if she could come and view the glass at our home.

A designated study has been made of it as it turned out to be a very special and rare glass, one of the oldest known Leerdam flower bulb glasses from the 19th century, which was not known to any of the 80 members of the flower bulbglass club. In 2015 a book was published “The Dutch Flower bulb Glass” written by Sytske Welling-Wester Secretary of The Flower bulb Glass Club and published by the National Glass Museum Leerdam in which our flower bulb glass is mentioned. 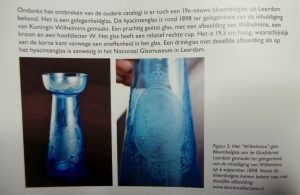