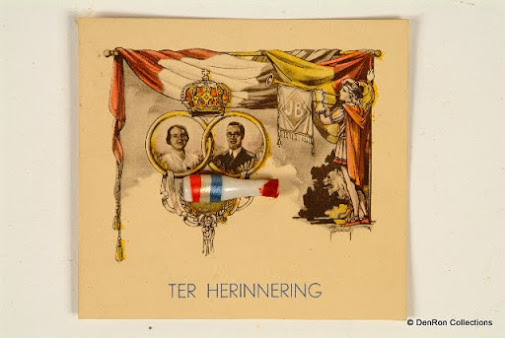 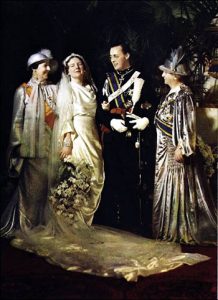 Juliana and Bernhard met each other for the first time at the Winter Olympics in Garmisch-partenkirchen, Germany in February 1936. Partly due to the involvement of Queen Wilhelmina, who was still looking for a suitable marriage partner for her daughter. A meeting was arranged with Bernhard zur Lippe-Bietsterfeld. Mother and daughter both liked him. More meetings followed at palace Het Loo and in August Juliana agreed with an engagement. This was officially announced on September 8. The Netherlands had just gone through a difficult time with the crisis of the 1930s and was looking forward to a huge party.
The wedding took place on January 7th 1937. On January 7th, but then in 1879, King William III (Juliana’s grandfather) married his second wife, Queen Emma.

It was a cold winter day and Juliana had put on woolen underwear under her bridal gown on the advice of Wilhelmina. The couple travelled in the Golden State carriage to the city hall in The Hague. 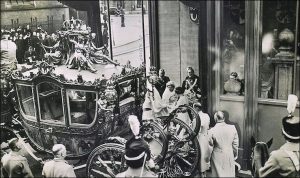 The dress had a 5-meter trail and the veil was made in Paris and was embroidered with silver roses and orange blossom. After saying “I do”, the couple went to the great Church for the church wedding.
After church they went on a tour through the city that ended at Noordeinde Palace. Here followed a dinner with 200 guests. The next morning the couple left early for a 3 month-long honeymoon. First Poland was visited for a skiing holiday and then the couple went to Budapest by sports car. After this, Vienna was visited where shopping took place and then on to Zell am Zee where Queen Wilhelmina was also on a winter sports holiday. The couple stayed here for 4 weeks! Then on to Bologna and Rome in Italy, then to Monte Carlo and finally to Paris.
The couple had 4 children. In the end it was not a happy marriage. Bernhard had affairs and there were scandals such as Lockheed. According to various sources, Juliana seriously considered divorcing Bernhard, but this was discouraged in the interest of the country.
In recent years they lived separately at Soestdijk Palace and hardly saw each other. They both died in 2004. There were dozens of souvenirs made for both engagement and marriage. Here are some examples. More photos on the website photo album wedding Juliana Bernhard.