The Queen Wilhelmina tiles from the firm Russel-Tiglia

The Russel-Tiglia company was a ceramic company active from 1936-1966 from the town of Tegelen.

It made bricks and roof tiles but is best known for its ornamental pottery.

The company was created by a merger of the Tiglia and Russel clay-ware factories.

George Goossens was the technical director of the factory and had an aptitude for art and design and founded an art ceramics studio.

The decorative pottery flourished during the Second World War. The ornamental pottery was made with red-fired clay with a white slip layer on which decoration was applied.

It was finished with a high gloss glaze, such as decorative tiles, commemorative plates, etc., but also many religious objects were made. These were usually made as a plaque or tile and usually in relief.

In 1948 this firm made 3 religious-looking relief tiles to commemorate the golden jubilee of Queen Wilhelmina. Tile one : The golden rectangle shows a heraldic representation of the Queen with the regalia. The crown, in one hand the orb and in the other the scepter. The image is framed by a big crown in the middle, on both sides a white peace dove, a bouquet and the ‘Cornucopia’ (a symbol of plenty consisting of a goat’s horn overflowing with flowers, fruit, and corn). Below in the middle the reign date ‘1898-1948’. The tile is covered in an off-white glaze with golden accents. Here and there the red clay colour shines through, which gives a wonderful effect.

Tile two: has a relief portrait of the Queen in the  centre.

One of them was made in color and unfortunately this one is still missing from our collection.

To our knowledge, these are the only royalty-related items the firm has made.

After the war, the company merged with NV Canoy brick factory and the production of ornamental pottery declined more and more.

In 1971 the studio was continued independently under the name Kunst Keramisch Centrum. 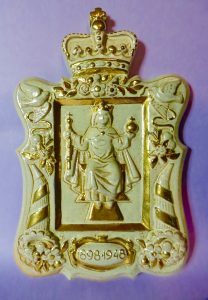 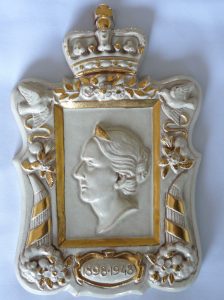 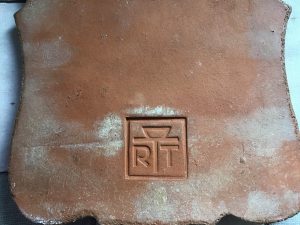