THE HISTORY OF THE ENAMEL COMMEMORATIVE BEAKERS

DenRon Collections > History > THE HISTORY OF THE ENAMEL COMMEMORATIVE BEAKERS

THE HISTORY OF THE ENAMEL COMMEMORATIVE BEAKERS

The use of enamel is over 2000 years old. The Egyptians used it on statues and golden objects. They knew that the use of enamel made the object last longer and and the hard surface was easier to clean.

The Kelts used this technique to make jewelry and the Romans used enamel on glass objects. The use of enamel went on for centuries and in the middle ages the French city of Limoges was the centre for the use of enamel on all kinds of ojects.

Much later enamel was used for everyday use on pots and pans etc.

Enamel is a mixture of quartz, feldspar the minearal borax and china clay. When this mixture is melted you can put it on an object and then heat it.

Between the late 19th century and early 20th century enamel commemorative beakers were issued in great quantities by various factories.

The first of these beakers was issued in 1896 by the then Bohemian firm of B.G. Gottlieb for the coronation of Tsar Nicholas II of Russia.

The firm Gottlieb was founded in 1880 in the town of BRNO and continued to be owned and run by the family until 1945.

In the UK the first advert for enamel beakers appeared in 1897 for the Diamond jubilee of Queen Victoria by the firm of WM. Robinson ltd of Wolverhampton.

In the Netherlands the first enamel commemorative beakers were made in 1898 when Queen Wilhelmina was enthroned. Many of these were made by the firm Berk from Kampen.

Later more firms started to make enamel commemorative beakers. A tradition still going on today in the UK but not so in other countries due to high production costs and declining sales. 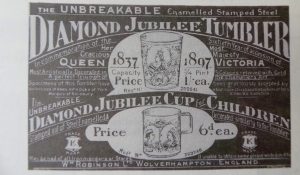 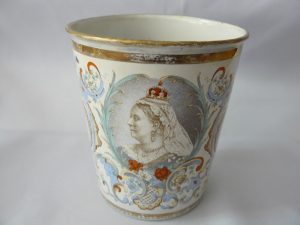 enamel beaker made for the Diamond Jubilee of Queen Victoria 1897 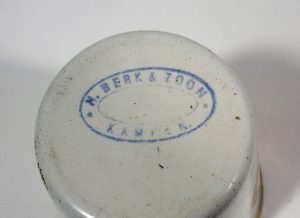 stamp on bottom of beaker from the Dutch firm Berk Kampen 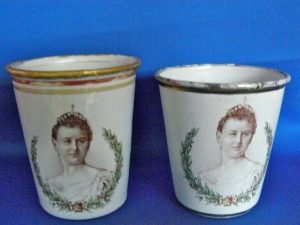 enamel beakers made for the enthronement of Queen Wilhelmina 1898 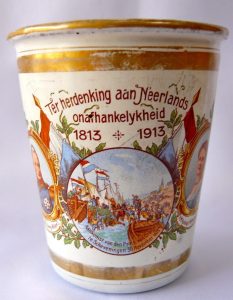 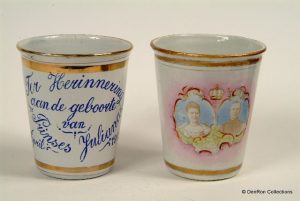 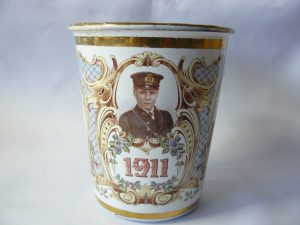 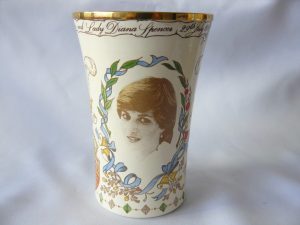